Part 4: Hollywood Here We Come! From documentary teaser release to the beginning of editing – The Truth About Reading

Posted on 8th June 2022 in Learning to Read, Reading Difficulties, Science of Reading 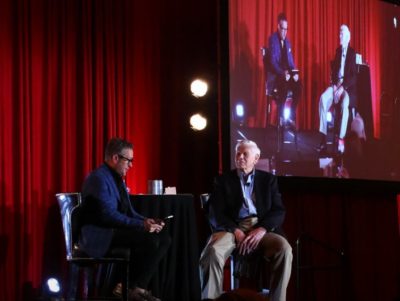 In Part 4 of this series of guest blogs by Nora Chahbazi, literacy consultant (pro bono) via the John Corcoran foundation to The Truth About Reading documentary team and Founder of EBLI, talks about the the excitement surrounding the release of the documentary teaser.

On September 22, 2021, the teaser for The Truth About Reading documentary was premiered at a private event in Hollywood. The unveiling of the teaser video was in the midst of a 3 day Success Summit at the iconic Roosevelt Hotel, complete with popcorn, giant size boxes of candy, and an enthusiastic audience. The teaser was the ‘appetizer’ event before the premiere of the completed documentary It’s Happening Right Here, also by DNA Films. 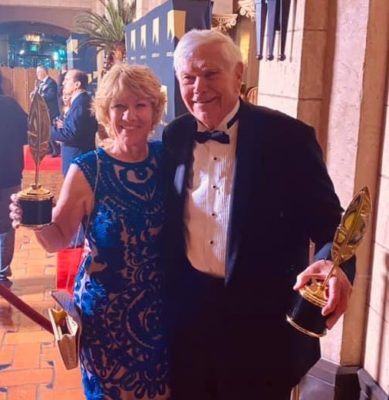 Nora Chahbazi and John Corcoran at the premier of the trailer in Hollywood.

John Corcoran and I sat next to each other with high anticipation, waiting for the teaser to start. We had agreed a year previously, when approaching Nick about creating the film, to his condition that we would have no input about the content that went into the film. We had (have) tremendous faith in Nick, in his brilliance, and in his uncanny ability to tell a story in a way that captured whatever audience was watching. However, we were well aware that there had been dozens of hours of interviews, that the topic was complex and controversial, that just 10 months before the low-level literacy crisis was nowhere in Nick’s awareness, and that this teaser would only be a few minutes long. It was a monumental task to undertake, and we were a bit apprehensive about what we were about to see!

As you know if you have seen the teaser, it is spectacular! Nick and his team hit it out of the park with this 4 minute gem!! John and I were beyond thrilled. To date, the teaser video has been viewed over 110,000 times.

After the teaser premiere, the filming of interviews for the documentary continued around the country. Interviews took place at the Plain Talk literacy conference in New Orleans, where many literacy champions were interviewed over 3 days. David Chalk and I also presented at the conference to share his story about learning to read.

Additional interviews in Florida, California, Minnesota, Georgia, Chicago, Detroit, and other locales took place over the next few months. A small number of interviews were done online due to scheduling constraints. All in all, over 60 researchers, educators, learners, parents, and others were interviewed for the film. 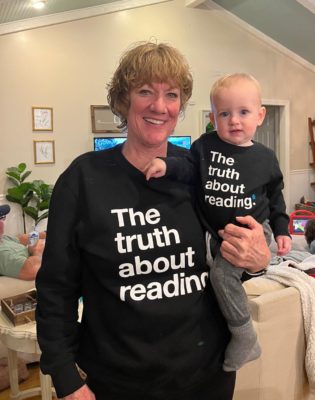 Nora and her Grandson, Arlo proudly display their Truth About Reading merchandise created as a fundraiser for the documentary

In January, a Literacy Champion retreat took place in the Los Angeles and San Diego areas. There was filming of interviews with John Corcoran, his wife, and others. A student book event at the beautiful San Diego Library was hosted by the San Diego Council on Literacy and the John Corcoran Foundation. This was an uplifting and emotional two days for all involved!

Over these months, The Truth About Reading shirts were created and sold. Heidi, from Literacy and Justice for All, with the help of the Science of Reading Facebook page founder Donna Hejtmanek, initiated this fund raiser for the documentary. Hundreds of shirts were sold and people began sharing pictures of themselves proudly wearing their wares. Many of photos these were shared on the documentary Facebook page.

Documentary filming commenced in early May and now the footage has gone to editing. While my work of educating the documentary team and securing interviewees is largely done, there are hundreds of hours of footage for the team to sift through and organize into a film that will undoubtedly be brilliant!

The full documentary will be premiered at a private event in Beverly Hills in late September. We now wait with high anticipation until that premiere! After that event, the film will make the rounds on the film festival circuit before being released publicly. It has been an adventurous journey to this point and I can’t wait to see what unfolds once the documentary is completed. I will keep you posted!

Nora Chahbazi is the founder of Evidence-Based Literacy Instruction (EBLI). She has presented at many education conferences and writes a bi-weekly blog, as well as hosting monthly webinars that aim to educate the public. Nora is the literacy consultant (pro bono) via the John Corcoran Foundation for The Truth About Reading documentary currently under production by 22 Emmy award-winning documentary director Nick Nanton. Passionate about providing a bridge from the research on reading, writing, and spelling to effective, efficient instructional practices that can be used in the classroom and remediation settings, Nora’s ultimate mission is to teach the world to read.

2 Responses to "Part 4: Hollywood Here We Come! From documentary teaser release to the beginning of editing – The Truth About Reading"