Posted on 24th August 2021 in Approaches to Teaching Reading, Learning to Read, Science of Reading 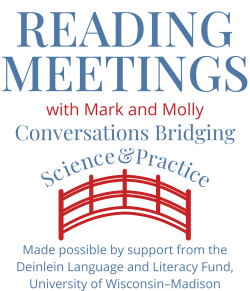 Have you had a chance to listen to some of these interesting conversations yet? See Part One for a summary of broad themes that arose in the course of the meetings. Below are a few more takeaways from some of the discussions.

In the conversation with Devin Kearns, which focuses on his recent analysis of syllable division rules, they discuss the origin of these rules and how they have made their way into so many instructional programs and even into the Common Core State Standards.

Seidenberg poses the question, “Is there really a rule or might there be a better way to discuss the same thing? Memorizing rules is especially hard for those with language challenges, and it’s really unclear what the benefit is. They introduce a large amount of cognitive load and can distract from the text.” They noted that some of these syllable division rules also simply do not align with the way our language works.

Alternative instructional approaches are proposed, such as “explicitly teaching a flexibility strategy” and “grouping words with similar patterns while providing masses of practice.” Marnie Ginsberg also explains that she hasn’t found syllable types or rules necessary, and that avoiding them is also more in alignment with how we learn.

Early screening for dyslexia risk is the focus of the meeting with Nadine Gaab. For those interested, Seidenberg has posted a link to a pdf with responses to questions and comments that came up in the chat during the talk, and the topic comes up elsewhere as well. This is an important conversation as many US states now have laws mandating screening. However, as one listener commented, they are “far behind on providing instruction.” In her discussion with Seidenberg, Margie Gillis echoed Gaab’s point that, “It doesn’t matter how good the screener is if we don’t do anything with that information.”

Seidenberg stresses that all children benefit from the same basic instruction, and it’s primarily a matter of intensity and dosage. “It’s simple if we do it right early and hit the ground running. If we wait, then we have to pull out all the stops and try to make magic happen.”

In his follow-up to the discussion with Gaab, Seidenberg notes that there is no clear, sharp boundary between dyslexic and non dyslexic children, and that those identified as ‘at risk’ when they are 4-6 years old will differ quite a bit in how they respond to intervention. The goal is to identify them at a point where intervention or remediation can be highly beneficial, perhaps enough to avoid the outcome of a dyslexia label. The point was frequently made that screeners don’t diagnose or identify dyslexia. “The only purpose is to direct instructional resources to children who need them at a critical point in acquiring a critical skill.”

Seidenberg agreed with some listeners that the screening process is accompanied by risks of misunderstandings, but he thinks they can be avoided by educating people about the purpose and appropriate use of screeners.

Throughout these talks, Seidenberg raises dialect as an important factor that many programs, curricula, materials and assessments fail to take into account. Many activities “just don’t land the same way” for kids who speak other dialects. Instructional and professional development programs that emphasize phonology, for example focusing on counting the number of phonemes and syllables, often don’t place enough emphasis on one of the key elements of phonology – its variability.

Julie Washington’s work has centered on children who speak African American Vernacular English (AAVE), but she explains that we also need to consider regional dialects. She stresses that this is an issue around the globe, anywhere where children are learning to read in the context of linguistic varieties… basically everywhere!

It was interesting to hear about the way this issue is approached in Jamaica and Trinidad where they focus on making the distinction between home language and school language. In the US there is often either a misunderstanding that helping children to map their speech onto print by explaining the differences between them amounts to “trying to change the way they talk ” and “is not culturally relevant, or [we have] the opposite problem of hyper correction.” Washington explained that “there is a way to value varieties, but [make clear that] this is what we do in school. School becomes another kind of diversity.”

The topic of phonological and phonemic awareness was the subject of one of the first meetings, one that Mark Seidenberg promised would be “polite, but intense.” This discussion with Susan Brady did indeed lead some controversy since information was presented that challenged common ideas and critiqued popular practices and curricula. Below are some key points that arose in that meeting (the recording of which was not released) and also in the follow-up conversation. Many are points that Seidenberg sprinkles throughout all of the talks.

● “English is an alphabet and the level of sound that’s relevant in an alphabet is the phoneme. That’s the level at which the sounds of words align with the spellings.” The real goal is getting kids to phonemes and a progression through a rigid stepwise sequence of phonological sensitivity tasks (syllable, onset-rime manipulation, etc.) is not a necessary route to phoneme awareness.

● Phoneme awareness is best developed through the teaching of phonics. Learning how phonemes are represented in print is the best way to develop phoneme awareness and skills.” The two things (phonemes and print) come together at every level from behavior to brain…print and speech. They have to walk together. They have to influence each other.”

● The reason we can do phoneme awareness tasks without print or “in the dark” is because of our experience with print. There is no need to teach it “in the dark’. It should be taught together with print and in the service of reading and writing words. “Get to print as soon as you can”.

Given the questions and interest many teachers have in the topic of phonological and phonemic awareness, Seidenberg and Farry-Thorn are planning to release some presentations in the near future on phonemes in speech and reading, and they also are planning a round-table discussion regarding implications for instruction. Stay tuned!

Recordings of the “Reading Meetings with Mark and Molly” are currently available to watch or to listen to as podcasts. Check them out as you enjoy these last days of summer, while you set up your classroom, or as you commute to your first days of school. They will give you and your colleagues plenty of food for thought.

This is a guest blog by Miriam Fein. Miriam is a speech-language pathologist and licensed reading specialist. She lives near Boston, Massachusetts, and supports students from early elementary through high school with reading, spelling, writing, and language skills. She believes in the power of evidence-informed, systematic, and compassionate teaching for all learners.